Like most people, I'm struggling to get rid of my Thanksgiving day left-overs....the 5 lb bag of potatoes that I used for the mashed potatoes is particularly troublesome....so.....I made potato pancakes! 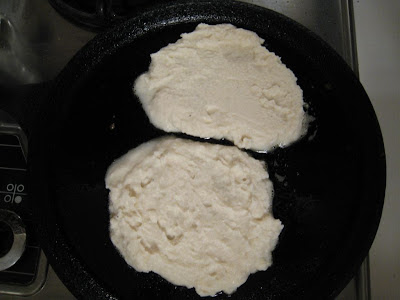 I just added some salt/pepper/onions.....Richie Rich wasn't too thrilled....oh, well, I enjoyed... 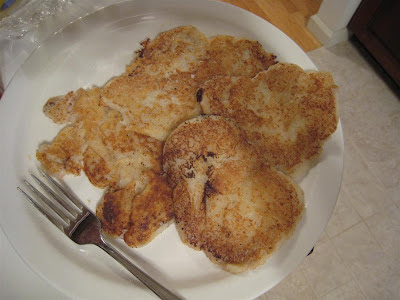 Every year, the Saturday after Thanksgiving, our nice neighbors Barney and Jackie invite everyone on the airport to their house for Brunswick stew and bbq pork. The day was lovely for late November - about 60 degrees and sunny. Here's Jackie stirring the pot (Barney is in the background cooking hushpuppies - he's the one in the flag apron, pointing.) 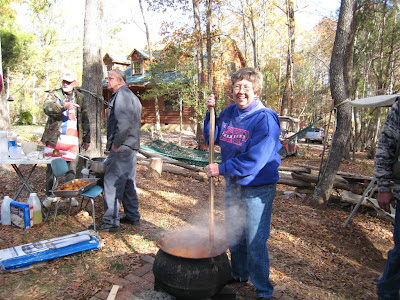 They're sweet people - they built the log house in the background all by themselves right after they retired.


I made some of my garbage cookies - this time I added some of the "Christmas Swirl" chips to make them festive... 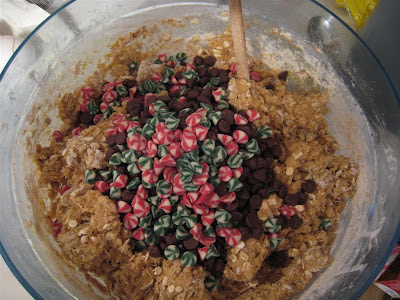 Next time, I'll add more of the swirl chips to make them more obvious....good anyway. 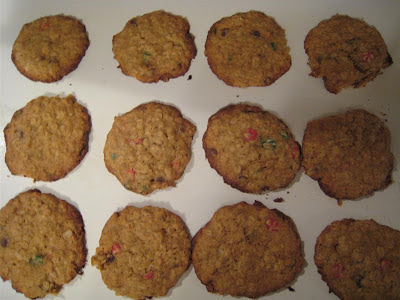 We finished up early today - Richard is going to Dahlia's house for supper, so we had to have our meal at noon....here's the obligatory food shot.... 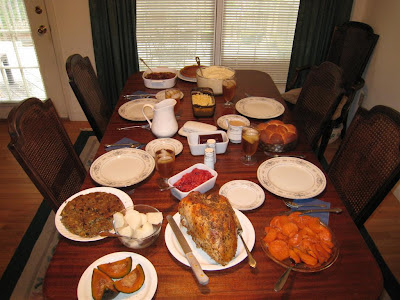 We enjoyed the usual items, including corn (frozen) from Dick's garden, turnips and sweet potatoes from Cordy's garden and some "buttercup" (like acorn) squash. Didn't think much of the buttercup, think I'll stick with butternut squash from now on...


And here's the "after" photo....amazing how all that trouble is stored in just a few containers afterwards!! 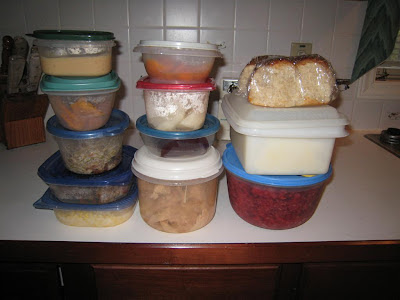 I actually wrote this post last week - and I tried to attach a short video....but something must have kept it from publishing...I removed the video - and reloaded: 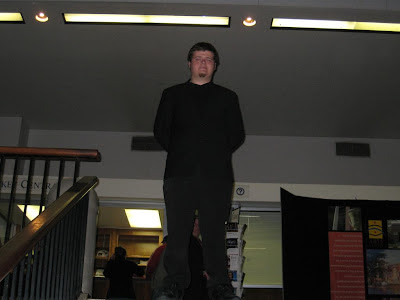 I went to see Robert play in his NC State Jazz band performance at NC State last night. I was surprised to see that his high school band director and 5 or 6 of the high school band members also made the trip to Raleigh to see him! He's looking nice, said he'd lost a little weight by watching what his was eating and due to his P.E. class - weightlifting. 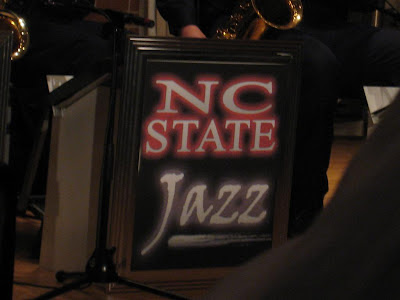 He's the lead trumpet in this group, so he had several solos. He also played nicely for the song "In the mood", which you may recognize as an "oldie-but-goodie"... 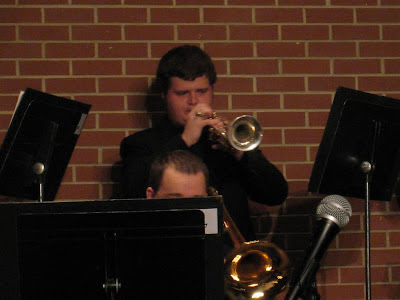 This is a cool, mindless little game online someone sent me:


This one will drive you nuts!! The object of the game is to move the red block around without getting hit by the blue blocks or touching the black walls.

If you can go longer than 18 seconds you are phenomenal.
It's been said that the US Air Force uses this for fighter pilots.
They are expected to go for at least 2 minutes.

The strangest plant grew over the past month or so - right in front of our house next to the boxwood bushes and the gardenia bushes. We let it grow - turned out to be a watermelon vine! One of those seeds that got spit during the summer must have decided it was time to reproduce! Well, this is as far as that baby is going to get....the frost got most of the leaves, but the little watermelon s still "hanging on". 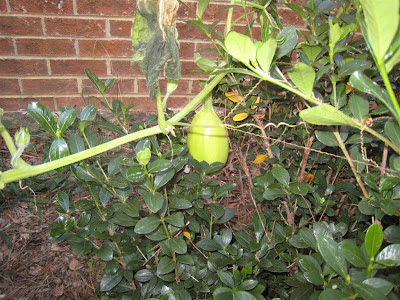 I was driving near Siler City this morning and just couldn't resist stopping the car and snapping this pretty fall photo! 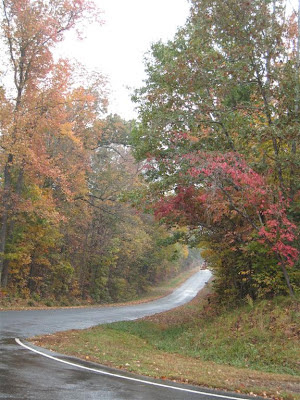 Yesterday, our neighbor Dick (as in giver-of-veggies-Dick) called and asked if we would like to be the "chase" crew for a balloon flight. Turns out to be the first time that he was going to take on a passenger - Lindy, his beloved.

Because of the prevailing winds, we took the balloon (on his trailer) to a field close by.

Here the balloon is all blown up - Duane has just come back from holding the "guy-wire" (I assume that's how you would spell that!!) While inflating the balloon, as it rises, someone has to hold a very long rope attached to the top of the balloon to guide the balloon as it inflates. Then you just let go of the rope - it just hangs there until the balloon is deflated. 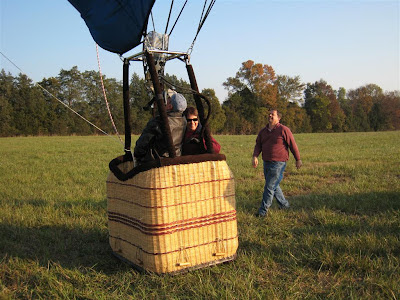 Here they are silently floating away....the dairy farmers on the adjoining farm had come to see what all the commotion was about. We sat and chatted with them for a little while as the balloon drifted away. (We knew the farmers vaguely anyway).
Soon, Duane and I got in the truck/trailer and followed the balloon....simple as that. We had 2 way radios, so we could talk to them, but mostly we could just see them in the distance. It was a bit of a challenge to decide which road to turn down. But, we figured it out in the end. 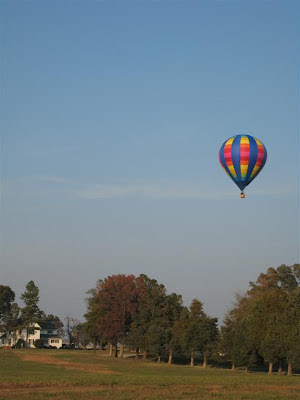 They ended up in a different diary farmer's field, about 3 or 4 miles away. There was not much wind, so very little drift (I understand this is a GOOD thing as far as balloons are concerned!)

Apparently, a balloon landing in your field draws attention - a couple of different farmers came up on their "gator" to offer assistance. Very nice folks! 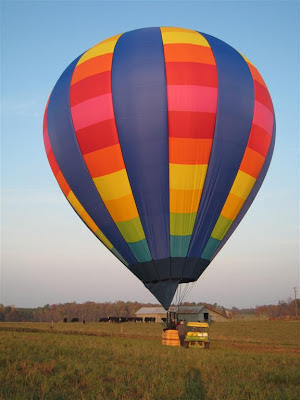 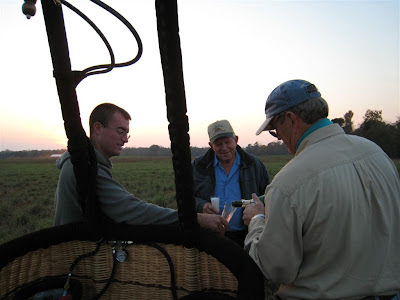 P.S. figured you're going to ask - yes, Lindy said she enjoyed the flight....and no, we're not likely to fly with him....not our cup of tea to be (mostly) out of control of the ultimate destination. Plus, I'm afraid of heights if I'm not moving forward at a pretty good clip!!!
Posted by Karen at 5:04 PM 2 comments: 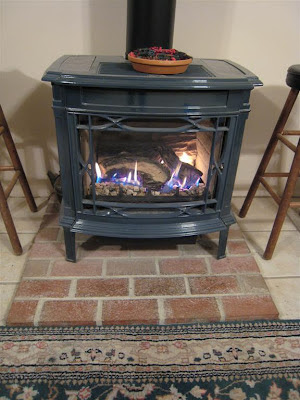 It's going to be cold here for the first time tonight - forecast is for 30 degrees....I convinced Duane to light the pilot for our little "fake woodstove" downstairs. I love to lay on the rug in front of it and read - which always seems to blend over into a nap! I hate cold weather, but I do love that radiant heat!

Setting on the stove, I've got a terra cotta "saucer" with potpurri inside. (You'll have to forgive me, but I can't figure out who gave it to me! - speak up and I'll remember!!) The warmth from the stove heats it up and the room smells like apple/pumpkin/cookie dough/Christmas!
Posted by Karen at 9:44 PM 1 comment: 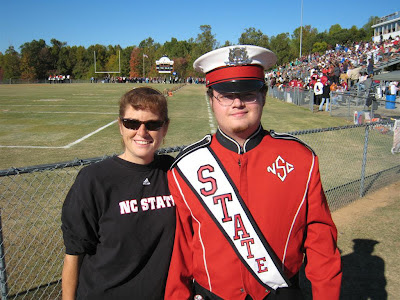 I went to see Robert play in a demonstration at a high school competition in Lexington, NC over the weekend. It was a nice recruitment tool for the NC State Marching Band!

One of the high school band members walked past Robert and I, turned to say "thanks" to Robert for the performance. I handed him the camera and asked him to take this shot!
Posted by Karen at 9:13 PM 1 comment: 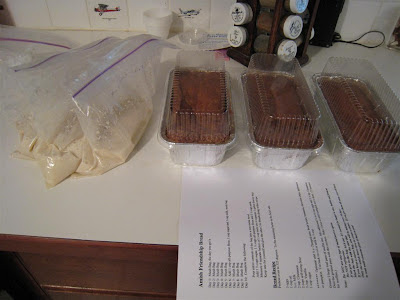 Sunday was day 10 for my Amish Friendship Bread - so it was baking day! I followed the recipe and added 12 oz. of milk choc. chips to the recipe. It was yummy. I had several small foil loaf pans, so I used them instead of the regular "meatloaf" pans. I took one small loaf, the bag of "goo" and the recipe to 3 of my neighbors - Lindy, Shirley (Pat's mom) and Jackie & Barney. I got a call from big Al (Pat's step-dad), raving about how wonderful the bread/cake was. 'Nough said! (Thanks Mom/Denise!) ((and sorry T, but I don't think this stuff would make it all the way to ND!!))
Posted by Karen at 6:33 PM 1 comment:

My sis posted this link in her blog - so I went to it and added a comment. Neat if you're into knitting, for sure.

This lady, Cass is doing a contest that involves telling about your favorite knitting projects, etc. Since I don't knit, all I could do was comment on the lovely knitted gifts that I have received.

Here are a few of my favorites from T - could have included a shot of a couple of things Granny has done for the "baby boys" - but they are all tucked away in the attic.... 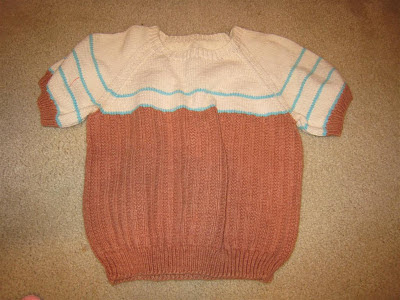 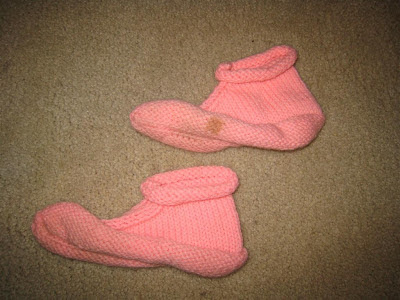 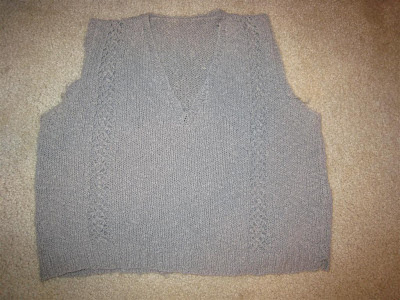 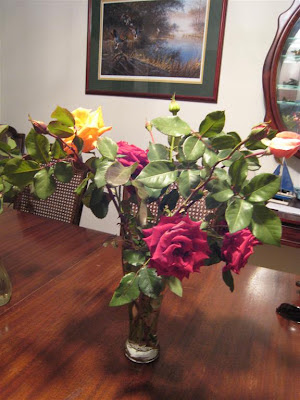 The strangest thing has happened in the past few days....every one of my 5 rose bushes has bloomed! (Somehow, I think the tense of that sentence is wrong!)

I have to assume it was the long drought, then the heavy rain we had about a week ago. Regardless of the cause, I am enjoying them. I clipped most of them because we are due for some cool weather - and I thought I would enjoy them inside!


We also had to take our airplane in for it's annual inspection before the end of October. Here she is- all torn apart....with one of our trusty A&P certified mechanics on-the-job! (This is at Siler City). They actually finished it this afternoon - I flew it home tonight because it is supposed to be blustery tomorrow (an I'm a ween-y about flying in 25 knot winds when I don't have to!) We're into safe and happy flying! 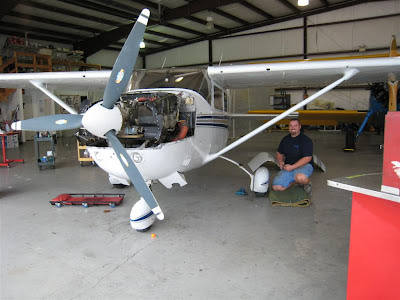