And let there be cake!!

My good buddy, Wayne Andrews, is turning 75 years young this week...some of his airplane buddies and his wonderful kids planned a surprise birthday celebration this Saturday at the airport. His kids arranged for BBQ to feed 120. And there had to be cake, of course.....so I volunteered. And it had to be a BIG cake! Here is the pan I used - next to a standard 8" cake pan. 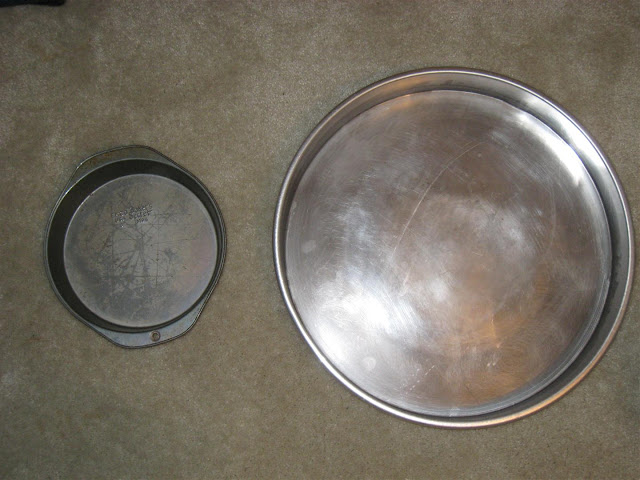 In order to get the batter to cook evenly throughout such a wide cake, you need to put metal "nails" in the batter to spread the heat evenly.  (These nails are actually made to make "roses" out of icing) 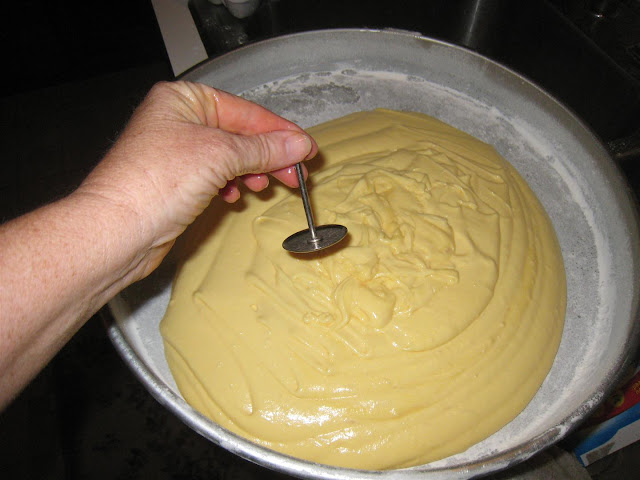 This is a finished layer with the "nails" protruding...perfectly done throughout. 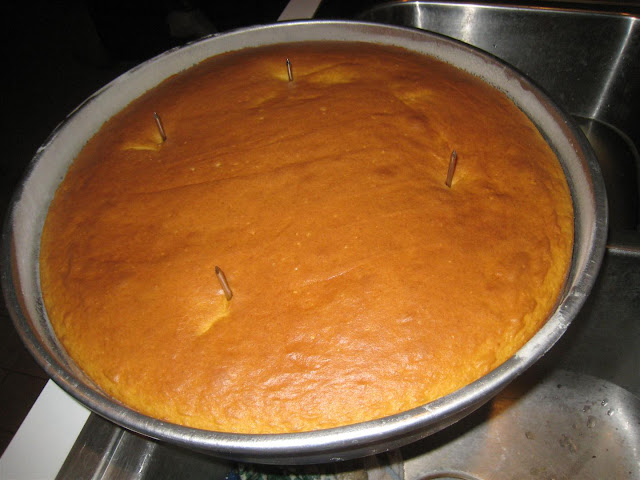 Now to ice the cake.  Much buttercreme frosting was made!! 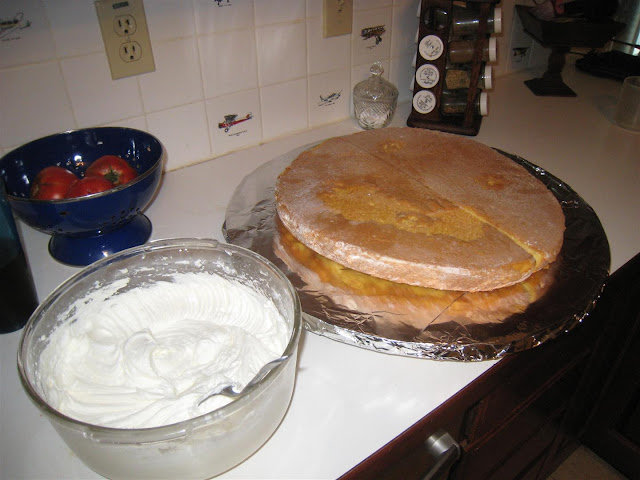 I mean, A LOT of buttercreme! 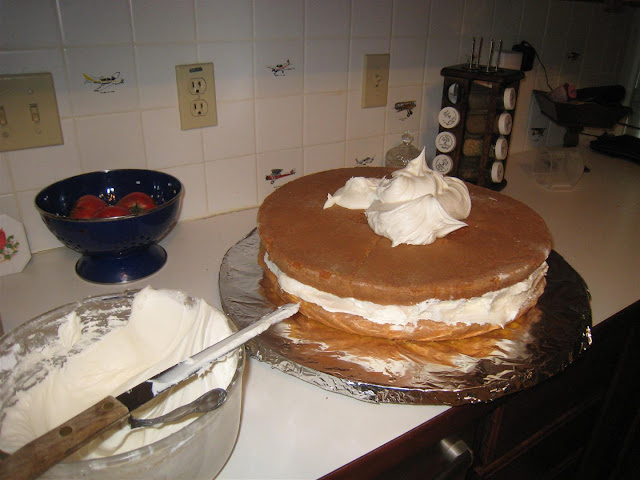 I got a "starter" coating of icing on at home.  There an additional layer you'll see next. 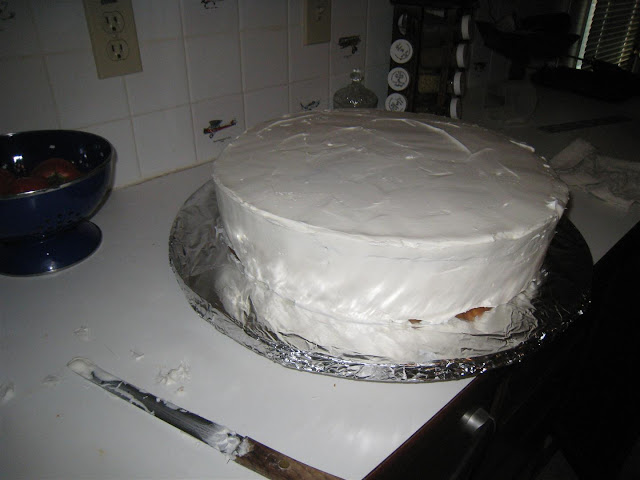 Then, it was off to the airport to finish the decorating. 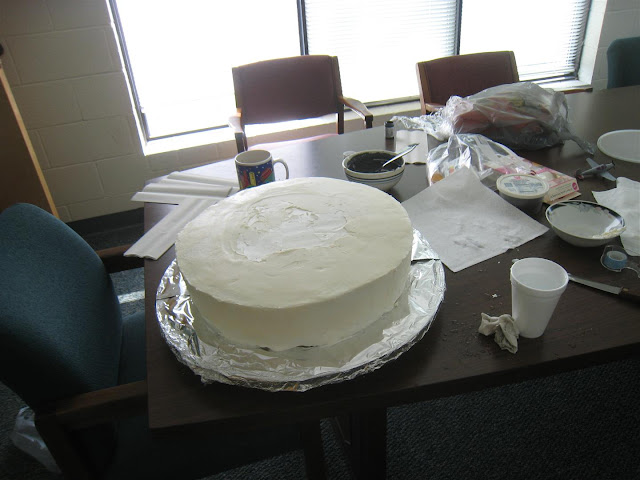 Here I am assembling the cake - the upper layer is going to be a runway.  I used black creme food coloring to get the pavement coloring. 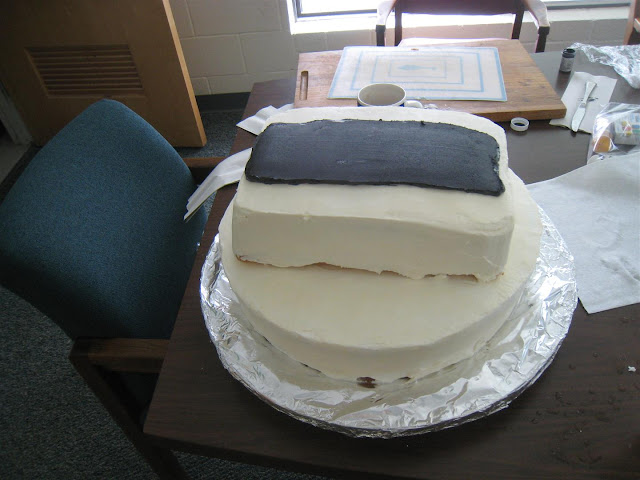 And there it is!  The plane is the closest I could find to Wayne's Sonex that he built himself a few years ago. 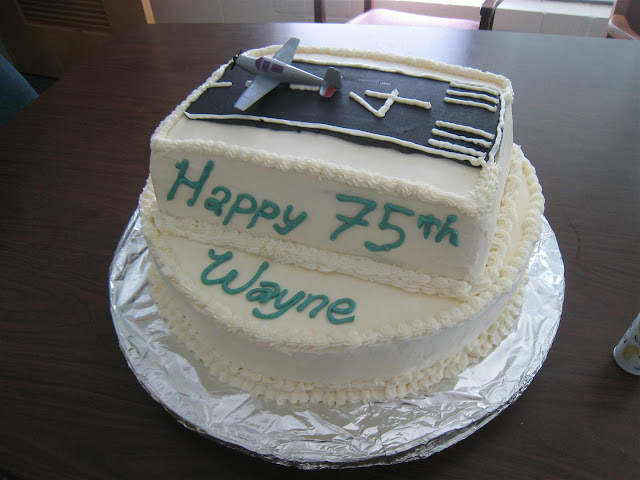 Now, on to the surprise! His wife and kids did a great job of getting him to the airport without him figuring it out! Many, many handshakes and hugs were doled out! 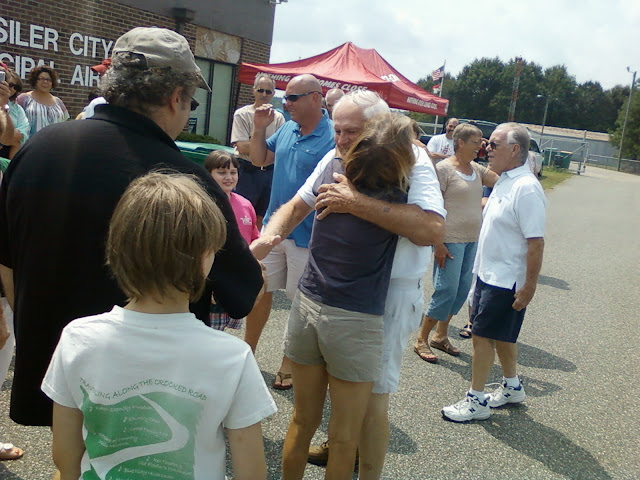 Here is the cake and some gifts. 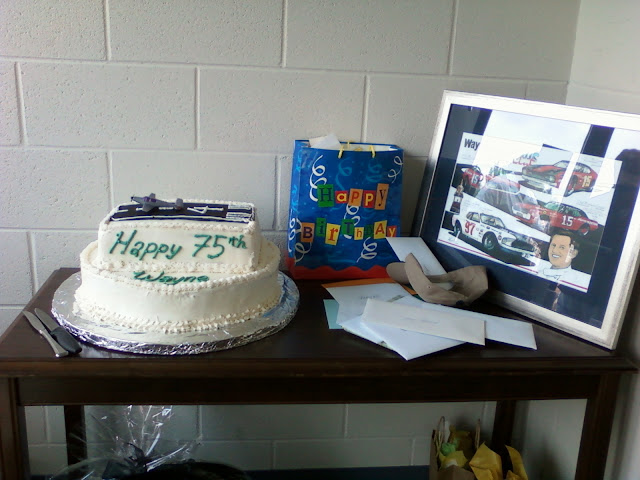 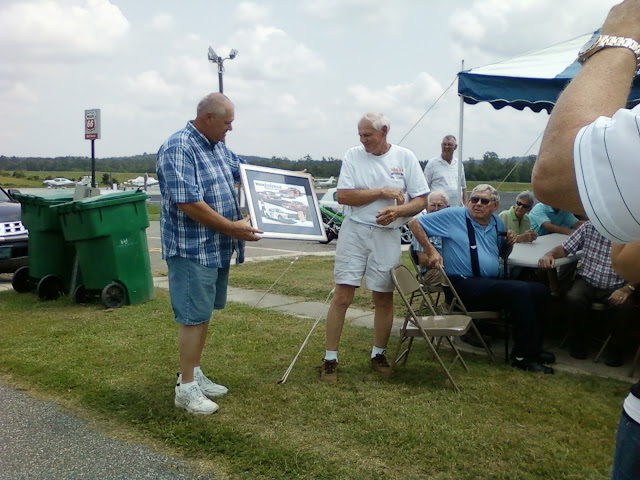 Then BBQ was consumed! 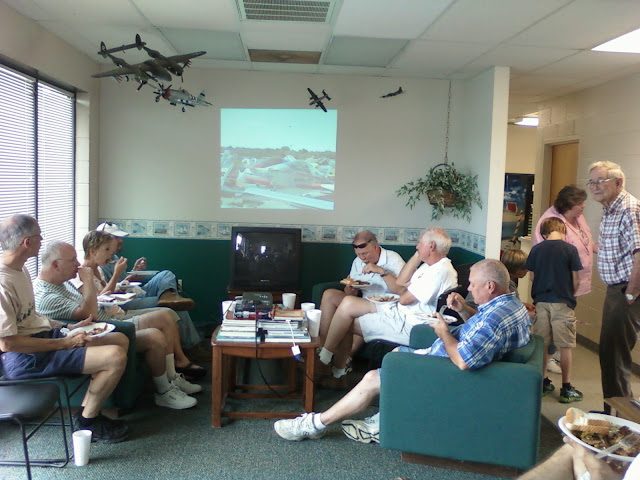 Here is a closeup of the artwork.  I didn't know Wayne in the 70's, but he was obviously a fixture on the race circuit then! 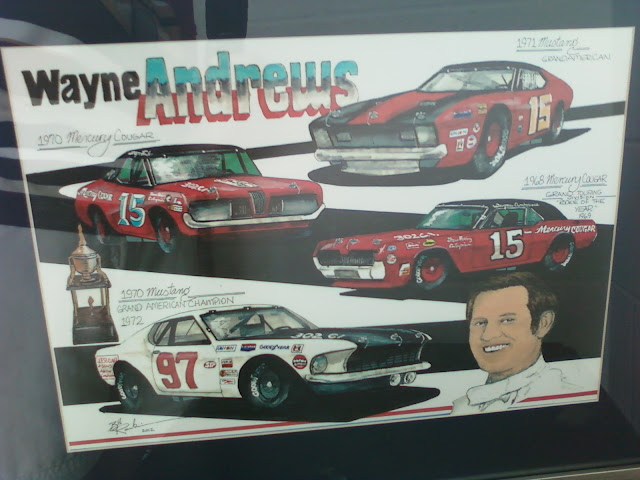 Wayne being silly with some of the equally silly gifts he was given! 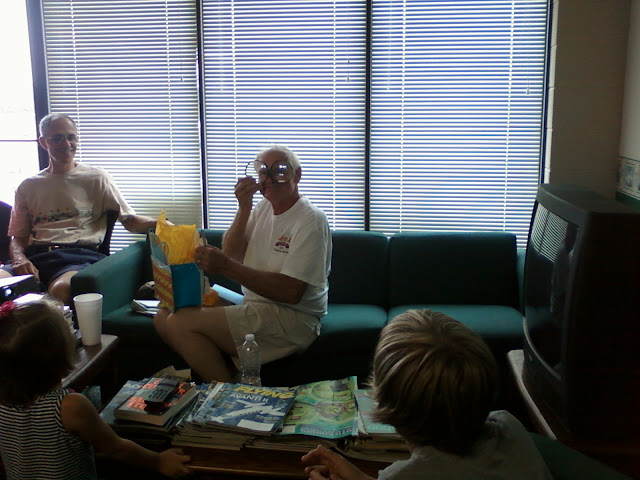 And this exactly the postscript any baker likes to see!!! 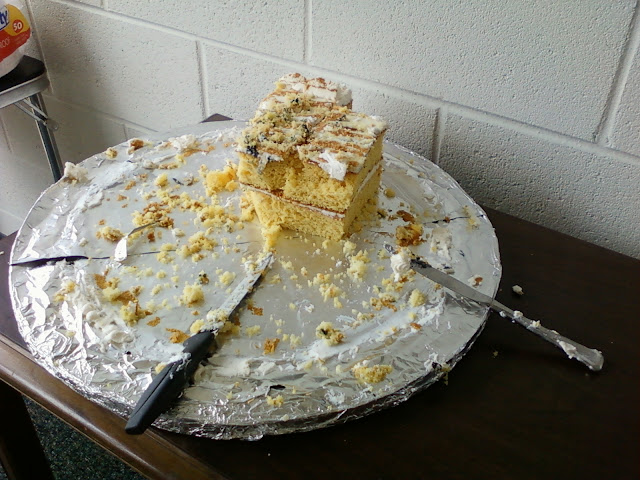 So what do ya think? I think they are right! 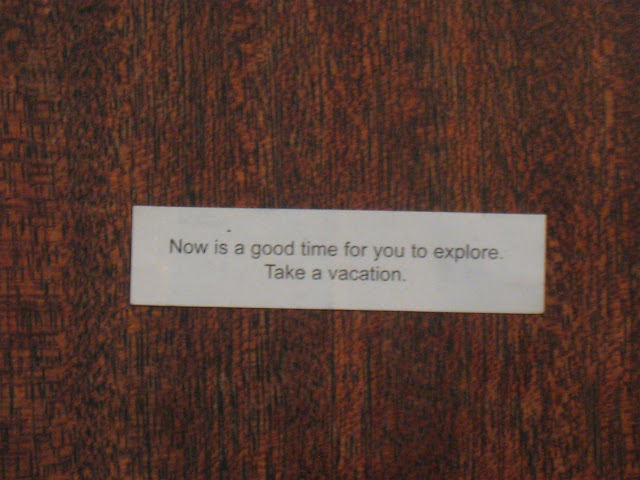 We spent last weekend at the boat with friends Cecil and Carolyn. 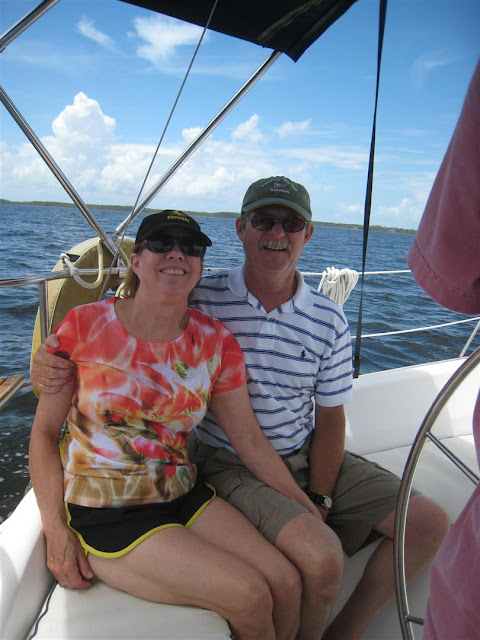 We did our usual trip up to River Dunes for a nice lunch. 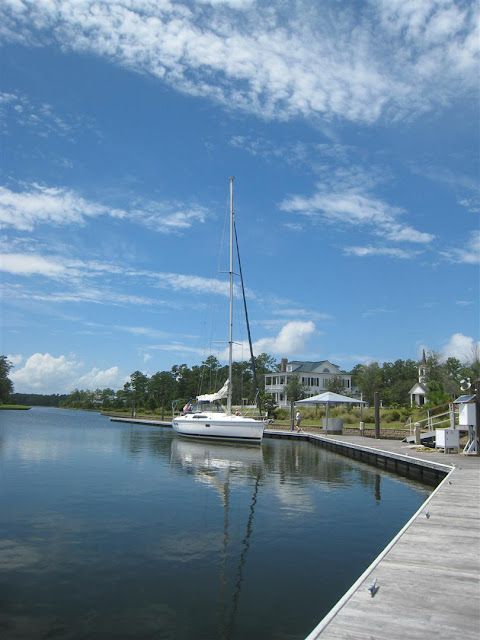 And had a great sail on the way back! Nice to have someone else do the sailing (so we can do the snoozing!!) 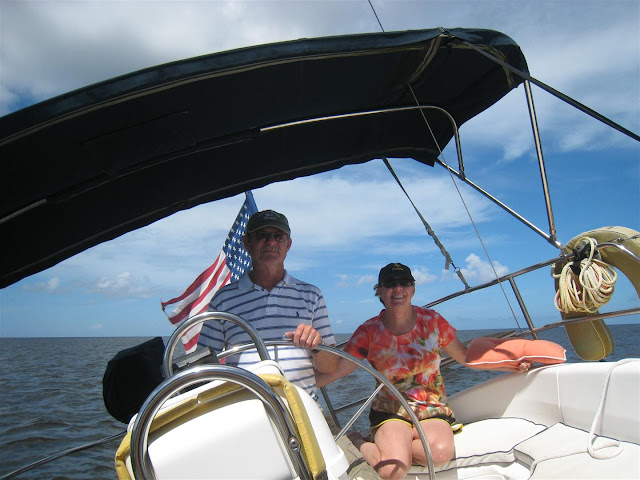 We did have just a little excitement on our return to Oriental. As I said, we had a great sail on the way back - so the engine was off for a couple of hours. As we approached Oriental, we had to crank the engine to get back into the marina. Something didn't sound right - a little investigation showed that we were not pumping the cooling water and the engine temperature was quickly rising. So, the guys deployed an anchor and got to work fixing the problem. This was the culprit - the impeller that pumps in the seawater to cool the engine. Luckily, we had a spare on board! 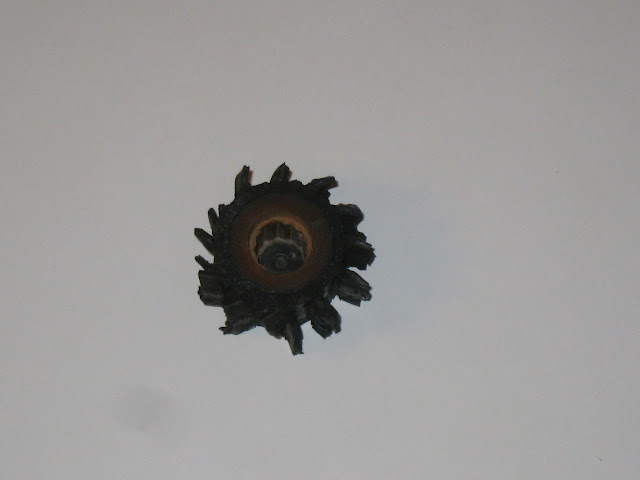 Working on the hot engine was not too comfy - but they got the job done. Here is what the new one looks like. Cranked the engine and everything was fine!

I went up to Asheville yesterday to visit with my sis who is vacationing this week from W. Va. I surprised Granny and Cordy with a visit on my way thru Hendersonville. Of course, I left the camera in the car, but they made me leave with lots of veggies out of their beautiful garden again. Here are some very yummy beets - I've already pickled them and they're in a container for lunch tomorrow.  (the rubber glove is 'cause I don't like my hands to be "beet red" after peeling them!!) 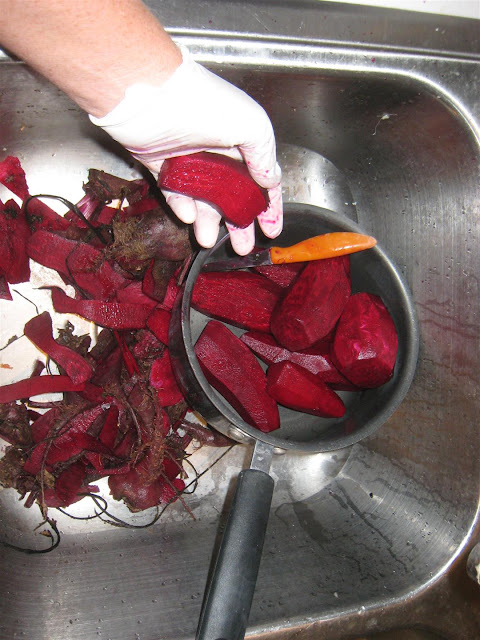 I stayed at Mom and Frank's for the evening - my sis and her family joined us for a nice relaxing meal and a little bit of swimming.....it stormed on and off and Mom made us get out of the pool! 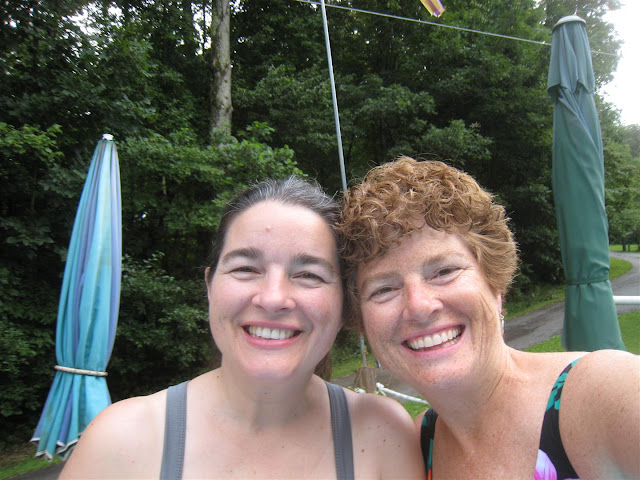 Teresa's birthday was just a few weeks ago - so there were some pressie's that she hadn't opened. 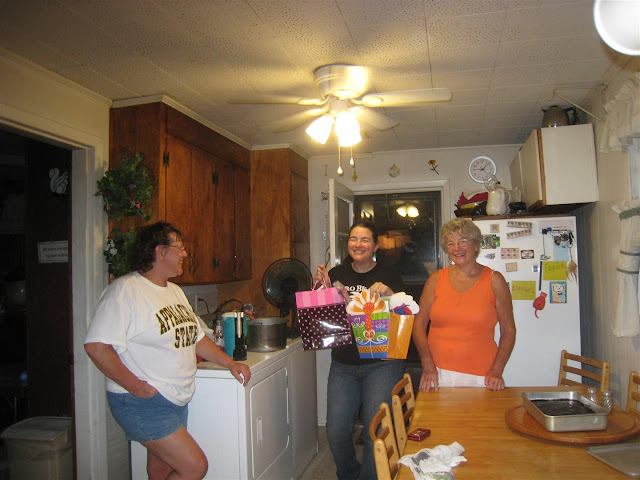 The next day, Teresa and I went over to Grandma's for coffee and visiting.  She's doing great at 96!! 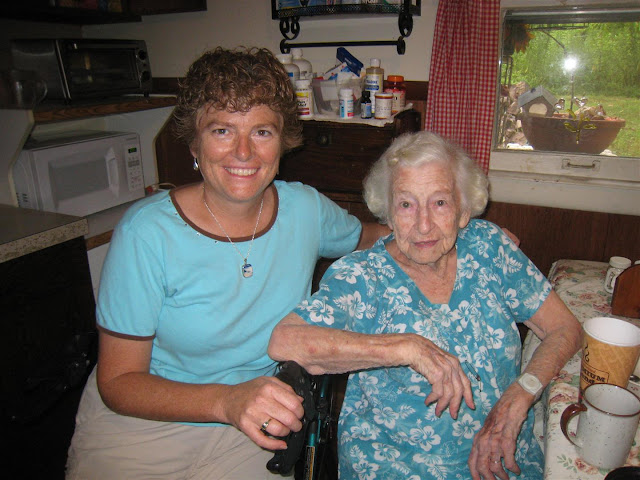 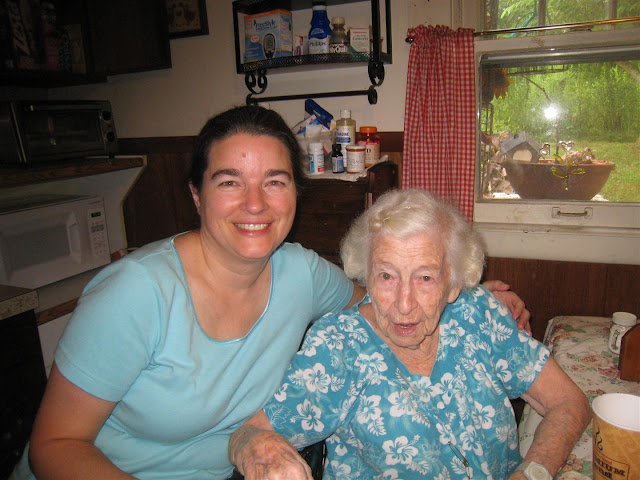 One final pic before I had to head home!!  (My head is really not that big - it's an optical illusion...haha). 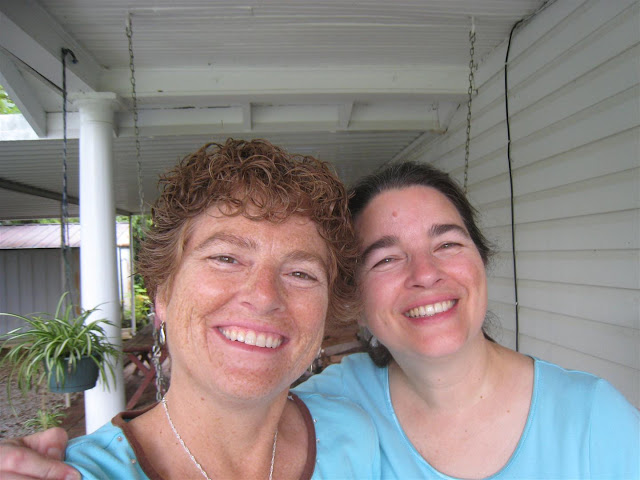 Oh well, I didn't get around to posting this right away.

Here's the photo I snapped in the parking lot before getting my hair cut - I had decided to give up on a "longer" look and go back in the direction that is easiest - short! 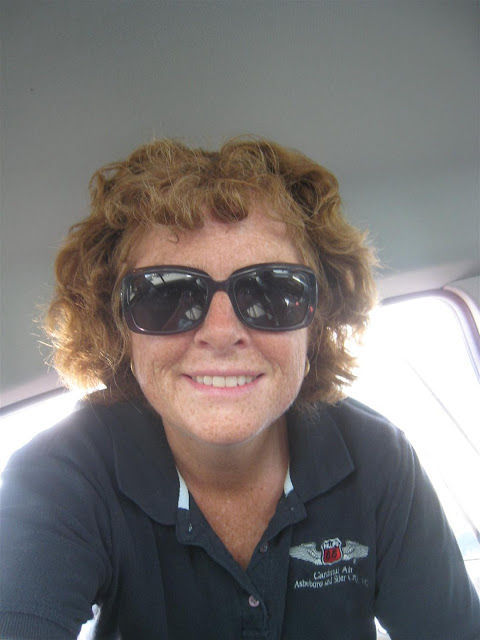 And here's the "after" - I'm pretty pleased with it - light as a feather - wash and go! 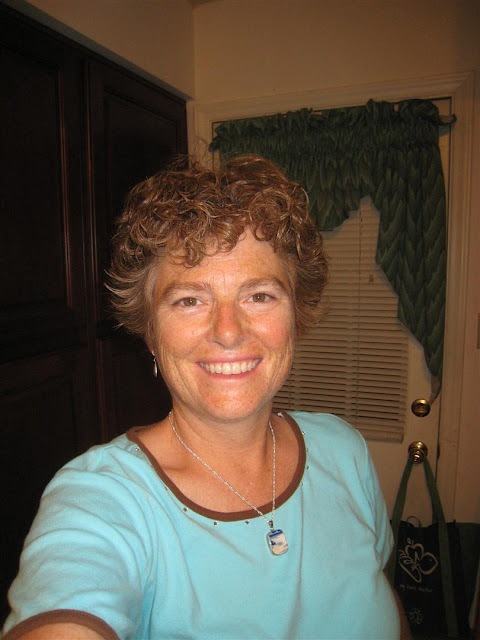